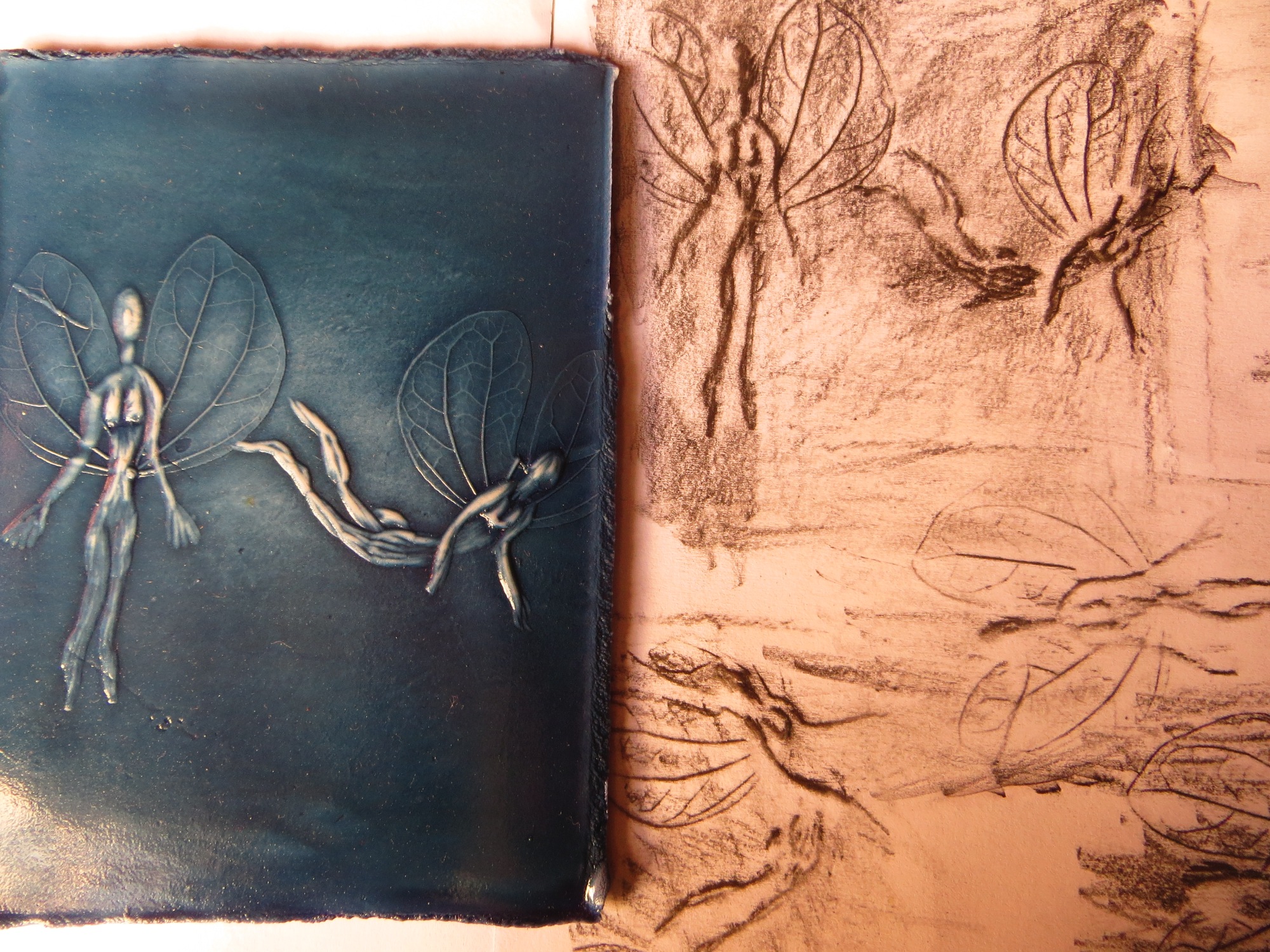 John Bauer collectors item tile- give away in this post.

They say, in the Artist’s Way (essential reading by Julia Cameron), that one should allow oneself, from time to time (she recommends once a week) opportunity to go on an “Artist’s date.”   I took myself on a me-time moment to do an artists date this week by taking up an invitation on Facebook  from ceramic artist John Bauer. He invited me to come along with him to Wellington (a small town in the Cape Winelands) to attend an art exhibition.   In my free-spirited youth, or should I say pre-motherhood life, I used to go on spontaneous adventures all the time. But now I reign myself in, and opt for the sensible predictable options, for fear of accidentally abandoning my children. (Call me over-responsible. Or not.)

It was a breath of fresh air to allow myself to step out of the daily circuit into a world of beauty and abundance, a place which rewards and acknowledges poetry and art.   (The world should be full of these kinds of places.)  The Breytenbach Gallery in Wellington is the original family home of the controversial artist and writer, Breyten Breytenbach.  Breytenbach is an inspiration because, he came from a very from conservative community. but was not held back by it, his truly free spirit spills out of every word he writes. Breyten Breytenbach was extremely courageous in his opposition of the Apartheid system, he stood up for what he believed was right and true against all odds, despite punishment and disapproval from society, the government and his family  (his brother Jan Breytenbach was a founder member of the notorious Special Forces- otherwise known as the “Recces”- the most dangerous wing of the South African Army.)  Breyten Breytenbach was exiled for marrying a woman of mixed race, and later was imprisoned for suspected terrorist activity, after which he published   “The True Confessions of an Albino Terrorist”  The Breytenbach Sentrum is a place that offers opportunity to upcoming artists to exhibit and develop their work and poets both through creating an exhibition space and by offering classes and a place to work.  So it is like an oasis in the desert for creatives in the area.

David Gwynn- Evans, a barefoot Biologist, whose passion for his subject is truly infectious, was the keynote speaker at the opening of the  exhibition entitled “Botanica”. He is so devoted to being close to and understanding the workings of the flora and fauna that he sleeps outdoors and doesn’t wear shoes.  It’s amazing how people discriminate against hippies. Take it from one who knows. Wearing no shoes, a kikoi and an embroidered waste-coat, many were surprised to find that he was not an uninvited guest, but the keynote speaker.   People judge too quickly: it’s so easy to stereo- type and right people off because of the way they dress. Some are so afraid of being stereo- typed that they dress really conservatively. Others don’t give a toss and choose to dress in what makes them feel happy. But they risk paying the price. That is exactly what Breyten Breytenbach did. He dared to be different and to take a stand against the system of the day.  It’s not easy living on the edge, but if you want to break new ground and be on the cutting edge, you have to risk displeasing, people sometimes and breaking the waves. But any rock or wall that is constantly battered by waves, changing the pattern in the sea, gets worn down eventually.

David, who is set to leave for Britain in a few days on a fundraising trip, spoke about about 3 of the projects he is initiating to help create more awareness of biodiversity and botanica.  He is also campaigning to protect the plants in the tracts of land between national roads and the fences.   In many places, this is the last refuge for species to survive. Specially in areas where the land on either side of the road is either ploughed or developed for buildings or mining.  In the city, pavement weeds are also little survivors of a mass genocide.  John Bauer celebrates pavement weeds in his work by making them part of his bowls.

It was refreshing to find an exhibition of art that was not trying to be too intellectual or conceptually clever.  Following the theme of “Botanica” through a wide range of media from sculpture to photography and including oil and water colour works,  resulted in works that were ethereal as well as down-to-earth and pure in celebrating the beauty of nature, which allowed artists to simply take it where they liked through skill and sensitivity to their subject.

See images of the works here:

The abundance of Persephone’s feast was one of the delights of being at the opening of the exhibition, which runs until the  5th of June 2014. 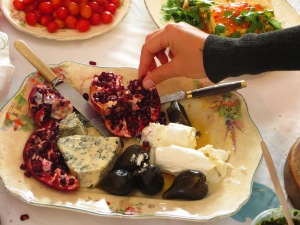 As I tasted a pip of the pomegranate, I was reminded of the goddess Persephone, daughter of Demeter, who was tempted by the dark lord of the underworld into his realm.  She would have escaped, but because she was tempted to taste a pomegranate pip from the feast of food laid out for her, a magic spell was cast; binding her always to return.

She became the queen of the underworld and is known in some cultures as the Goddess of vegetation and Spring.  So it was appropriate to the theme of the exhibition – Botanica- to get carried away dreaming of Persephone!  And I certainly feel that I will be returning to the Breytenbach gallery again, having tasted  what it has to offer.

I also loved the works available in the gallery shop and the other things that happen there. 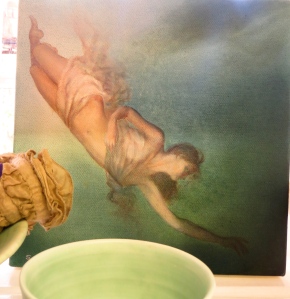 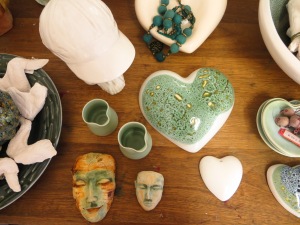 A Poetry festival takes place at the Breytenbach Centre in Septermber.

There is a beautiful poetry garden downstairs with mosaics, sculpture and a fountain and best of all, poetry in the trees, written and hanging or engraved into unexpected surfaces.  At the poetry festival, there will be performances by musicians and poets in the spring garden.

John Bauer Adopts a Step by making a spontaneous tile donation to the gallery:

After most people had gone home, John Bauer boldly laid a selection of the beautiful tiles he had on display into the top step of the staircase leading to the gallery.  He announced that by claiming this step he was inviting others to do the same.  Bauer is a true artist of community, he strongly believes in helping others to express themselves and find their feet as artists.

So John Bauer launched the  “Adopt a Step”  –  initiative at the Breytenbach Gallery  and already other artists, such as Dalida Seeligsohn, Nada Spencer and Cherie Prins  have pledged to take steps too.  (Contact Anne-Ghrett at galery@breytenbachsentrum.co.za if you would like to make a contribution of your work to this project.)

This tile is to be given away to any reader of this blog who is able to identify what kind of leaves John Bauer used to make the fairies’ wings.  Alternatively you can state the name of David Gwynn-Evans’ eco-intitative  awareness projects he is launching to protect botanical biodiversity (as mentioned earlier in this blog).

The tile can also be used to make rubbings, just as one can do bark and leaf rubbings with a soft pencil.  I had fun with this when I got home.  They look like photographs of fairies.

The exhibition of Botanica at the Breytenbach Gallery in Wellington runs until the 5th of June.