There is a new wave of colonialism taking place in Africa. The new colonialists wear corporate logo’s and care only about profit margins. This comes in conjunction with a very open policy in regards to gaining mineral rights. “Right now, a small “uranium rush” is on.” Writes Dr. Stefan Cramer, science advisor to SAFCEI,  “Every fly-by –night wants to get a slice of the cake, often under questionable circumstances… in these days of “mineral grabbing,” all you need is a letter head and good connections to lay your hands on the mineral wealth of this country.” He points out that many unknown companies with names like “ Wealhage House of Capital”- run by a 26-year-old entrepreneur from Limpopo, and “Blue Moon Mining” are applying for uranium rights, and “it doesn’t cost a dime to include uranium in an application. There are rumours that the Gupta’s- the Indian billionaires controlling the President have invested in farms in the area with the view to mining.

This comes at a time when landowning farmers in the Karoo are especially vulnerable. The economic climate and the impossible task of competing with large-scale industrialized agriculture in the market place. It also comes at a time of incredible ecological as the ravages of climate change batter an already fragile ecosystem. Applications for mining have been made in area’s from Beaufort West to Aberdeen, Jansenville to Wolwerfontein, Kliplaaat to Steytlerville. Area’s where topsoil has been so badly damaged by overgrazing, drought, dust storms and occasional flooding.

Yet, if Uranium mining is allowed to take place there will be no reversing the consequences which will affect a much broader area than just the forlorn Karoo farms where they take place.

Think of the river carrying uranium tailings and its path to the sea. Think of the dust storms blowing across the Plains of the Cambdeboo. It is said that even one particle of uranium dust in the lung and you could cause lung cancer.

We are living in strangely intense times: times of extreme polarity of opinion and moral and ethical beliefs. We see merciless greed from corporate and political power seekers versus selfless heroic sacrifice from earth keepers trying to defend the last of what is left. There are sharp contrasts of attitude towards our environment and “resources” whether they be our common ground- a National park mountain or the ocean and beaches, or whether it is the private farm of a farmer who has no ownership of the minerals that lie beneath the surface of the precious topsoil where he is attempting to grow food for a living while contributing to feeding the population in the cities.

I am the daughter of a fourth generation Karoo farmer. My father Robert and grandfather Roland Kingwill taught me the importance of topsoil. I grew up with the extreme winds of the Karoo, which blow dust devils around in the drought, tore trees out by the roots.  As a child, I experienced extreme drought, where the sheep walked like skeletons into the dry dam and searching for water to drink and become trapped there by the thick drying out mud, where we found their poor drowned bodies. Life is tough and death is one of the seasons we face when we live close to the earth

I have seen floods, the roar of rain, when the water runs quickly over bare earth and becomes a thundering river that carves deep gorges into the landscape, bends iron fence posts and washes away trees and cattle to the next farm and beyond. I understand the power of nature, and I have seen with my own eyes the way that landscapes are not stable. They constantly change even in the most ancient and supposedly “geologically stable” landscapes as the elements shift them. Nothing can be taken for granted. “Continents drift at the rate of the growth of our fingernails.” A well- known paleontologist once told me. So to me, it is really obvious that no pile of Uranium tailings or nuclear waste dug into the earth somewhere in the middle of nowhere is really safely hidden. Ever. 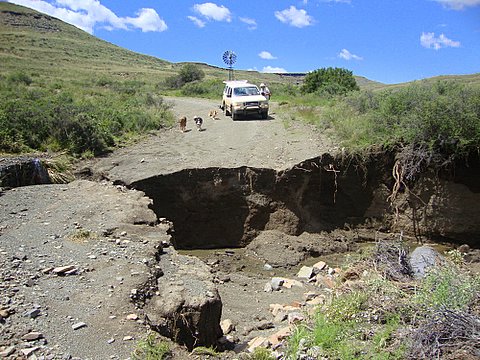 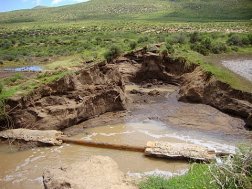 While doing research for my documentary “Buried in Earthskin”, I learned that Uranium is the most toxic substance we could possibly dig out of the earth. Taking it out is like opening Pandora’s box. It unleashes its’ evils into the world and that powerful wild energy can never be put safely can never be put back in. This is why I found it very ironic when the minister of Minerals and Energy told me in an interview with a sweet smile, that “Nuclear energy is clean energy.”

Many forget that Nuclear is powered by a very treacherous fossil fuel: uranium and the nuclear fuel chain results in radioactive waste, which is an international long= standing unsolved problem. No safe storage solution has been found. The by-products of this industry are used in weapons of mass destruction. Little is told of the radioactive weapons and discarded bomb shells which are left scattered all over places like Afghanistan and Syria and Iran where it is used as shells for weapons that roll into the houses of innocent children who pick them up and play with them, thinking they could be toys. The implications are so terrible that nobody is civilized society really wants to know about them, so they are buried under a carpet of unconsciousness along with rest of the nuclear waste problem. There is nothing clean about nuclear energy – it is a darker shade of dirty than coal.

Uranium is best left in the ground where it belongs: making its own powerful magic beneath the crust. It has its own purpose there. I believe our creator provided other means of creating energy like sun and wind. We are free to harness those if we so wish.

When Uranium mining began in the Navajo reservation. It was one of the poorest communities in America. They were probably promised jobs and other perks. This community is now even poorer because they have lost their health as well. The men were used as workers. They were not given adequate protection against the harmful yellow cake dust. The water sources and wells were contaminated with this dust and the wives and grandmothers drawing water from their traditional wells in their sacred land were not informed. When the mine closed, it was not properly sealed or cleaned up. The results have been legacies of terrible cancers and a degenerative disease called Navajo Neuropathy- which causes a wasting away of muscle. Children are born with severe deformities, which affect them and their families for the rest of their lives. These are massive life-changing environmental impacts. Stories have been told of families who discovered that their houses had been built with bricks made and cement, which contained radioactive tailings near mines. Chronic illness and cancer resulted, families left in ruin. As one Navajo woman profoundly states: “Money can buy you lots of things, but it can’t buy you a new pair of lungs. This is an echo of the famous letter written by Chief Seattle to the President: “When the last river is gone… then will you realize that you can’t eat money?”

Various forms of this story have played out over and over again in poor uninformed communities around Africa, such as Malawi and Namibia and if nothing is done to stop it, it will be happening in poor farming communities near Beaufort West and Aberdeen in the Great Karoo, as well as Namaqualand, South Africa. Again the people most affected will be the descendant’s of the earth’s first peoples, the Nama and the Khoi San.

Despite the fact that the trillion rand nuclear deal between South Africa and Russia to build a fleet of nuclear reactors was ruled unconstitutional in the high court, companies are still pushing the uranium mining agenda and are breaking through. A company called Ferret Mining is has been granted the right to mining exploration near Beaufort West.

All I know is that there is very little resistance to this. A handful of Karoo farmers living in the area and a few members of the communities in surrounding towns are aware of the dangers and are doing their best to protect themselves, but they need every little help they can get.

This is the latest information received on the matter:

Please be advised that the application by Beaufort West Minerals (Pty) Ltd (BWM) for Environmental Authorisation (EA) of the Rietkuil Prospecting Right application (Reference WC30/5/1/1/2/10250PR) has been granted in terms of the National Environmental Management Act (NEMA, Act 107 of 1998) by the Department of Mineral Resources (DMR) in the Western Cape.

Here are some links to video stories told by the Navajo.