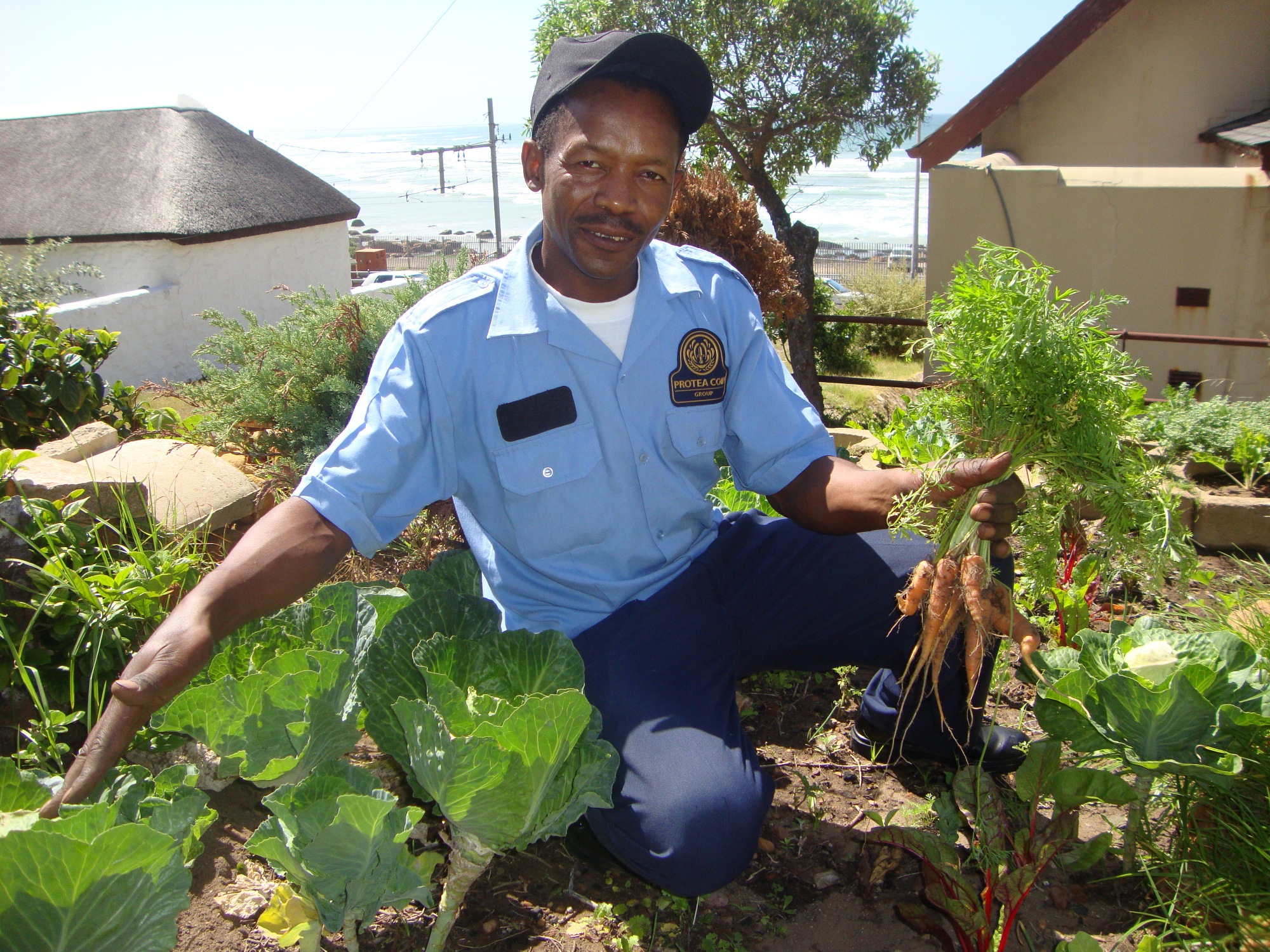 The Muizenberg Police Museum on the Main Rd next to the glamorous Casa Labia, is easy to miss. It wears tired beige and is currently closed to the public due to pending renovations. But if, on a whim you so happened to wonder in, you would find yourself surrounded by healthy spinach plants, carrots, turnips, cabbages, potatoes, even mielies. (Corn) Every inch of space has been utilized to grow food.

One day in May 2011, after working as a Security Guard at the museum for two months, Walter Mokoatle (41), decided that he had had enough of standing around. He got permission to take out the ornamental flowers, which had been there 10 years, and set to work growing food in their place. He filled the beds with compost, which had naturally formed from falling leaves under the old trees on the edge of the property. Then he sowed the seeds he had bought with his own savings. He constantly replenishes the compost with lawn clippings along with what he constantly clears from the garden. “Of every crop you plant, 10 percent does not make it, and that percentage goes back to make more compost, it’s a cycle.” Explains Walter.

The garden is so abundant that Walter is able to give to the needy and cook healthy meals for his work mates. “Turnips and spinach are good for the elderly.” Says Walter, who supplies vegetables to impoverished elderly members of his community in “Overcome”- a crime ravished informal settlement on the dunes near Capricorn Park.

According to Walter, the secret of his gardening success is the magic ingredient: Love. “When you plant a seed, those plants become your children.   I feel them calling me and I know they need attention.” He grew up in the Maluti Mountains on the border of Lesotho, where he worked with his Grandmother every weekend tilling the soil and tending to the plants they subsisted on. “We lived from our garden, the only thing we needed to buy for cooking, was oil,” he remembers.

Walter’s decision to begin a garden came out of a need to heal his heart and it has had significant therapeutic value in his life.   He had been unhappy in his marriage and was “tired of life without love,” so he had made a personal decision to “make nice” and to create beauty in his life. He began working on a garden around his shack, and then took it a step further into his work. The garden at the SAP Museum, became a means of therapy/rehabilitation for prisoners doing community service. Each prisoner was delegated a section of the garden to work on. One prisoner even returned after being released to see how his plants were doing.

“The thing you do for love is the one that will take you far, not the one you do for need.” Says Walter philosophically. Walter is not alone in realizing that a few plants around one’s home and at work can make a big difference to one’s nutritional intake as food prices rise steadily. Many survivors of the economic crisis in Zimbabwe relied on their own home-grown food to get through the food shortages in recent years. Utilizing urban spaces to grow food locally is a simple solution to a global problem, which anyone can participate in.

Careful use of water when growing vegetables is essential. Installing a grey water system to recycle used household water onto ones garden is sustainable and cost-effective. (This can be done by simply siphoning ones bath water onto the garden with a hose pipe.) Walter is particularly proud of the fact that he managed to grow a banana tree next to his shack and is watching the leaves unfold, one by one. “If you learn to garden and grow your own food, you will never be hungry.” Walter points out. Time to get out and start sowing some seeds.

The above post is an article I wrote 7 years ago for The False Bay Echo.

News update:  Walter made efforts during renovations to the Police Museum to keep his plants alive, (visiting them with a watering can on his bicycle daily)  “My plants are like my children.” He told me.  He harvested green vegetables and took them back to the squatter camp where he lives in the suburb of “Overcome” on toughest part of the Cape Flats.  It is almost on the landfill and has the highest murder rate in the country.   He lost his job at the Police Museum once the renovation was complete.  Apparantly he was accused of selling the vegetables. . The story he told me is shrouded in mystery and intrigue and requires further investigation.  He said that he uncovered the skelotons of two bodies.  In his dreams the spirits of the people who were murdered came to him and told them that they were apartheid victims.  He reported finding the bones to the police. However this finding and his insite about who they were is what he believes caused him to loose his job. He also believes that  it may have led to the incident that occurred a few weeks ago from which he was lucky to escape.

More about this life shattering event in the next post.

Anyone who would like to make a contribution to help Walter recover can donate to the following account with the reference: Walter recovery fund:  I will keep it in a savings for him.