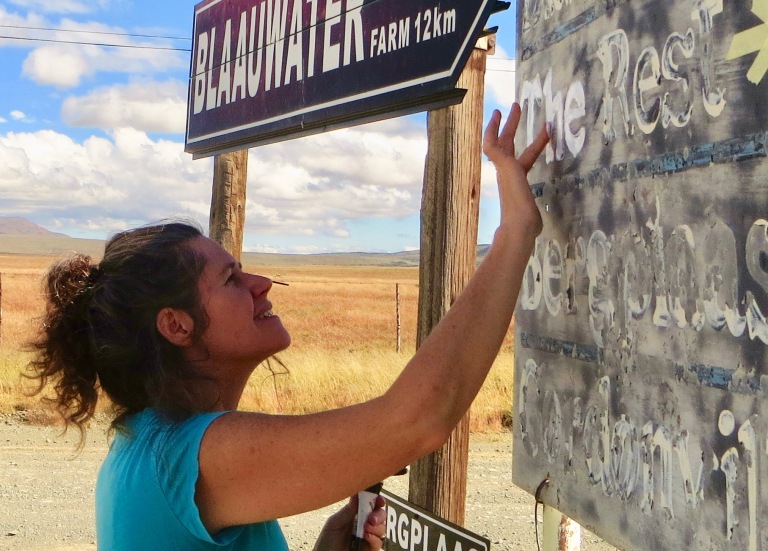 Helena Kingwill grew up on a farm in the Karoo and attended an all-girls boarding school in Grahamstown. (D.S.G.) In her gap year, she worked at two London theatres (The Westminster and the Piccadilly front of house) and a Swiss theatre in Montreux (backstage.)  She also had the opportunity to work on a BBC Channel 4 production in Paris (Directors PA – Gerald Fox.)  She attended Cape Town Film and Television School (John Hill) in 1990 for a year, specializing in Script Writing. In 1991, she took the opportunity to work on her first feature film The Road to Mecca (Featuring Athol Fugard, Yvonne Bryceland and Kathy Bates.)  The experience inspired her to attend drama school.  She did a Performance Diploma at the Waterfront Theatre school the following year.  Then returned to her home town of Nieu Bethesda to set up a festival and a community arts project. (1993). This lead to some amazing collaborations between her artist connections, such as artist Beezy Bailey and Owl house sculptor Koos Malgas who then worked together on two big projects, as well as theatre director Brett Bailey and the children of the Nieu Bethesda township. She helped facilitate these collaborations. She also did a course in English Literature by correspondence in the same year. (UNISA). The same year she published her writing (poetry and articles) in a National arts Magazine (Get The Funk Out) then travelled to England to research a book.  When she returned, she wrote the first 23 chapters, but this volume remains to be completed.  She moved back to Cape Town and began writing regular features for The Big Issue Cape Town.  In 1998-she crossed into TV again while continuing to freelance as a feature writer and investigative journalist.   She Learned skills as an apprentice co-director for Griffin films (Jemima and Tim Spring and Simon Damaste) but mainly as a researcher and scriptwriter for three different Educational TV series ( broadcast on SABC).

In 2001 a proposal she wrote (based on a Big Issue article she had researched) won her a place at the Encounters Documentary Laboratory which was the start of her journey to producing, directing researching and presenting her first feature documentary: Buried in Earthskin.  This was completed in 2009.  In the process of seeking funding for funding for this project,  she moved to Johannesburg.  She met Muna Lakhani and was handed the job of running the NGO Earthlife Africa for a short period in 2002, but found a new leader and stepped out of it to work on other documentaries and environmental projects (“The Air We Breathe” and “Black Man -White Woman” with Hand Held Films.) She fell pregnant with her first daughter and became a regular feature writer for Your Pregnancy Magazine for 3 years, during which time she birthed to two babies 21 months apart, got married and moved back to her Karoo farm for 3 months and eventually to Cape Town.  Then began writing regular features for Cape Town Child Mag.

In 2009  after the completion of her documentary “Buried in Earthskin,” she started work as a freelance researcher for Cooked in Africa Films. (Celebrity chef-Justin Bonnello).

She has since completed “The Fisher Stories- Life in the Time of Climate Change,” (Masifundisi Trust)  and researched a 13 part series on sustainable agriculture for Cooked in Africa Films. (Cooked 5 -Living Free.) In 2010, she did research and production for a corporate-funded feature documentary called “Corruption.”  In 2012-13 she was given the job of story director, compiling and scripting a documentary series for Cooked in Africa about the state of our global oceans (Moving Sushi.)  See her blog:” Earthnotes for Hope”  for further enlightenment.

She began Earthnotes for Hope blog in 2012.